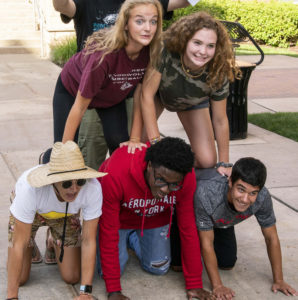 The NJCTS Tim Howard Leadership Academy will empower a new set of leaders and advocates this weekend.  Twenty-four teens from across the country will take part in an intensive four-day program promoting self-empowerment, self-leadership, and resilience—all important skills to succeed while living with Tourette Syndrome.  They will train and house at the Busch Engineering, Science and Technology Building on the Piscataway campus of Rutgers University from August 1 to 4.

Tourette Syndrome (TS) is a neurological disorder characterized by uncontrollable movements known as tics. As many as 1 in 100 people show signs of TS or other tic disorder which is frequently accompanied by other mental health disorders including ADHD, OCD, and anxiety.

Created in 2014 in partnership with superstar soccer goalkeeper and TS advocate Tim Howard, the Academy is the only program in the country where participants have the opportunity to learn from neurologists, geneticists, psychologists, social workers, and others about their diagnoses. The teens will also take part in smaller “Team Talk” sessions with Academy coaches – young adults with TS with personal experiences to share. The program also includes a tour of the Cell and DNA Sharing Repository which is conducted by Dr. Jay Tischfield from Rutgers Department of Genetics and the Director of the Human Genetics Institute of New Jersey.

“We want them to leave as experts with the ability to advocate for themselves and be ready to face an often misinformed public,” explained Academy Director Melissa Fowler. “With the lessons and skills they gained, and the goals they’ve set for themselves, this class will step up to be the voice of awareness in their own communities.”

This year participants range in age from 15 to 17 and come from New Jersey, New York, Pennsylvania, Massachusetts, Texas, California and Puerto Rico.

“I enjoy the activities, seeing my friends and learning more about my TS,” said Kaia  Morgan, 16, from Syracuse, NY who has been coming for the last three years. “But we don’t just listen to presenters all day. We get to discuss what we’ve learned and how we can implement it into our lives when we go home.”

Your ticket for the: NJCTS Tim Howard Leadership Academy Welcomes Class of 2019 at Rutgers this Week