The NJ Center for Tourette Syndrome & Associated Disorders, Inc. (NJCTS) received an official proclamation from the Governor’s Office of New Jersey as well as a Joint Legislative Resolution recognizing June 4th as Tourette Syndrome Awareness Day in the Garden State. 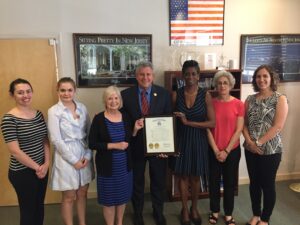 The proclamation reads as follows:

“WHEREAS, Tourette Syndrome (TS) is an inherited neurological disorder that is characterized by involuntary physical and vocal tics that occur repeatedly throughout the day; and

“WHEREAS, Tourette Syndrome is often accompanied by other conditions such as attention deficit and obsessive compulsive disorder, learning disabilities, and depression; and

“WHEREAS, this neurological disorder affects 1 in 100 children. More than 20,000 school age children in the State of New Jersey alone are dealing with TS and although some of these cases are aided by medication, there is no standard treatment or known cure for this disorder; and

“WHEREAS, it is estimated that more than 200,000 Americans have full-blown TS, and that as many as one in 100 show a partial expression of the disorder—such as chronic multiple tics or transient childhood tics; and

“WHEREAS, while a TS diasnosis is twice as likely among non-Hispanic White children than among Hispanic and non-Hispanic Black children, there is an important need for more professional help with interest and expertise to identify, counsel and treat people with TS; and

“WHEREAS, positive actions to assist those children and families dealing with TS would result from a broadening of public and professional knowledge and acceptance of TS; and

“WHEREAS, the NJ Center for Tourette Syndrome & Associated Disorders, Inc. is the Nation’s first Center of Excellence for Tourette Syndrome and is actively providing services to families, educating medical professionals, teachers and social workers, and supporting research to better understand the signs and treatments of TS;

“NOW, THEREFORE, I, CHRIS CHRISTIE, Governor of the State of New Jersey, do hereby proclaim June 4, 2017 as Tourette Syndrome Awareness Day in New Jersey to promote understanding, compassion, and acceptance for all of our fellow citizens who deserve and need our support to break the stigma that surrounds Tourette Syndrome.”

For more information about Tourette Syndrome and NJCTS, call 908-575-7350 or visit www.njcts.org.