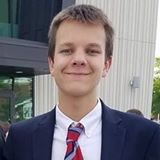 Greg is a graduate of Indian Hills High School and a 2018 NJCTS Scholarship finalist. This is his scholarship essay.

Although having Tourette Syndrome can be a challenge at times, it has allowed me to discover things about myself that I would not have otherwise known. The journey of learning to manage my condition has helped me develop an inner strength and confidence in dealing with life’s obstacles.

I had always been a fidgety child, exhibiting frequent tics in the form of repeated noises and abrupt movements. My parents did not realize how much of a problem it actually was, and they assumed that I would learn to behave myself when I started kindergarten. Unfortunately, having no control over my impulses, I was unable to sit still in class and constantly made random grunting noises every time I wasn’t talking. I was so used to doing these things by that point that when my teacher asked me to stop, I had no idea what she was talking about.

I ended up getting sent to the principal’s office at least once a week during the first few weeks of school, as my teacher still believed that I was simply a disobedient child who was disrupting the class on purpose. I never understood what I did wrong when I was punished, because the tics were so natural for me. Searching for solutions to my ‘acting up’, my parents took me to a pediatric neurologist, who diagnosed me with Tourette Syndrome.

Though some might suspect that being diagnosed with a disorder would be a huge burden on a child and his parents, the truth is that my diagnosis started a gradual journey of my life becoming significantly easier. Once we knew what was wrong, I could start to learn how to control myself.

My teachers from that point forward were incredibly understanding of why I acted the way that I did, so the guilt-inducing trips to the principal’s office thankfully stopped. Instead, my teachers, counselors, and parents helped me work towards small goals, managing one impulse at a time. First, they helped me to realize when I was making grunting noises and repetitive motions, and then helped me to substitute them with smaller, less disruptive sounds and behaviors. We didn’t try to stop my behaviors, but redirected them instead, and I gradually learned to increase my control over my tics.

The process was extremely difficult at first. But as I began to minimize my unusual behaviors, I started to see positive changes in the way my classmates interacted with me. Before, the kids hadn’t wanted to sit at the same table as me during lunchtime, but eventually I was accepted, and was able to fill the social void that I had unknowingly been carrying all my life.

By now, I’ve progressed to the point where I’m able to spot unusual impulses on my own and manage them to minimize any disruption, without the need for anyone else’s intervention. Through these tiny instances of self-control, I’m harnessing a small but mighty power that I only recently realized I have.. The power comes in small doses of self-control, but when stacked up on top of each other, these small doses combine to form a life-changing journey of self-improvement, where I have gone from a complete lack of any self-awareness to having control over every aspect of myself. Most importantly, though, my self-control no longer feels restrictive; it feels empowering and gives me a new-found confidence. If I can meet the challenges of Tourette’s, then I can conquer anything.