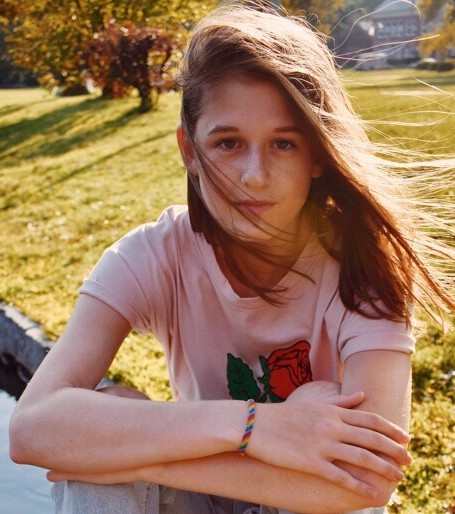 Alexis is a graduate of Indian Hills High School and a 2018 NJCTS Scholarship finalist. This is her scholarship essay submission.

My eyes would open and close time after time, fast and wide. My arms would swing up and down like powerful wings, strong and light. My head would pond with the force of a million suns as my neck twitched side to side. My breath would be tense and in short bursts. My throat would constrict like a boa, and then release to free its prey. My jaw would clench and then open so wide you would think my lips were trying to escape the touch of each other, like two star-crossed lovers being held apart by the forces of the universe.

This is what it’s like to have Tourette Syndrome – Or at least, my experience with it. It started with rapid blinking when I was six. The blinking was a twitch, and these twitches that came with Tourette’s were called “ticks”. Before I was diagnosed, my parents tried to get me to stop blinking quite often; they explained to me how it wasn’t necessary and even offered me rewards if I could stop. But I couldn’t. After a while, it progressed to my eyes first opening wide like I had seen a ghost and then looking up towards the sky. I didn’t know how much of an effect this tick would have on me until one sunny day in the spring of 2009.

At lunch that day, the lunch lady was reprimanding me for talking while she was talking. In the middle of releasing her rage onto me, the lunch lady suddenly froze, and a look arose on her face, causing chills to run down my spine. I was terrified of her, and I had no idea what she would do next. Abruptly, she got really close to my face, and said that if I dared roll my eyes at her again, I would be sent to the principal’s office. I gave her a puzzled look and explained that I didn’t roll my eyes. She ignored me and began to seethe with rage and scream at me, calling me a liar. That day I went home from school crying. At the time, I didn’t understand. Now I realize – she saw my tick.

Kids used to ask me why I would “blink like that,” so I would tell them that I had something in my eyes. When a new tick appeared one day, causing me to flap my arms up and down, the kids started calling me a chicken. All of the negative attention that I received from my Tourette’s caused me to be extremely self-conscious. I began trying to fit in, and people noticed. I tried being mean, nice, and everything in between. Heck, I even tried liking guys for a while, but that didn’t exactly work out. Eventually I realized that changing myself was not the answer. I vowed to turn over a new leaf.

I was determined to be myself and only myself from then on, and to persevere at being an individual, regardless of the pressures I would be under to conform, and regardless of who critiqued me for it. This included being compassionate towards everyone and accepting their flaws, as well as accepting my own flaws and loving myself no matter what. I have since realized that living myself is one of the most important favors I can do for me. Through loving the person I have grown to be, I have naturally built confidence in myself, initiative in my actions, and compassion for others. I have a determination to find solutions to any problems I am presented with. I promised myself that I would cease in trying to be someone else, because in becoming somebody else, I was depriving myself of being who I truly was.