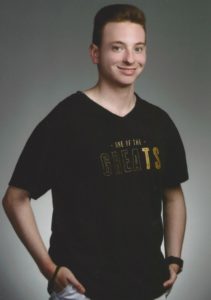 When I was twelve years old, I was sitting in the lunch room, and in an instant, the school went into lockdown. For most students this is not a serious issue. They stay quiet and out of sight. For me, lockdowns are a challenge because I have Tourette Syndrome (TS), a disorder characterized by involuntary movements and sounds called tics. While the rest of the cafeteria was quiet, I couldn’t help but involuntarily yelp and twitch my neck. It felt as though the eyes of the world were glaring at me with their ears wide open to the noises I was making. I was not expecting the comment that would hurt worse than the constant staring and whispers from that school year. This unlikely offender was a quiet, but kind person who sat in front of me and asked, “Why are you doing that? What’s wrong with you? Someone should put you in a cage or something!” It was at that moment that I knew that I had to speak out about Tourette Syndrome and advocate for myself.

About a month later, a person from the New Jersey Center for Tourette Syndrome and
Associated Disorders, Inc., came to my school and educated my peers about TS. During both presentations I stood up and stated that I had TS and I deserved respect. Through speaking out at the presentation, I became more confident and unafraid to say I have TS. In a span of six months, I went from being bullied, and afraid to feeling confident and free to be me. I learned through that entire experience that I wanted to be the one up in front of a crowd helping kids with TS come out of their shells. I later became a National Youth Ambassador and Patient Educator for Tourette Syndrome. I continued on to speak at schools, hospitals, and universities. My most rewarding experiences were when I spoke to children with TS and their peers.

Out of the adversity I have faced, I have learned to be resilient. I have developed thick
skin that has made every comment and stare bounce right off. I have learned to get back up after each defeat and push through to every victory. Throughout every tough event in life, I have turned to music to get through them. It is a known phenomenon that people with TS don’t tic while performing. Music is the reason that I wake up at 5:00 every morning to be at my before school choir class. Throughout my life I have had two passions: music and Tourette Syndrome. It is my hope to combine them into a career in music therapy. I hope to do research to figure out the correlation between the reprieve from tics and music in Tourette Syndrome patients. Hopefully, one day I will come up with a viable way to treat people with TS through music.

Through my past experiences I have learned to see each challenge as a gift. If I didn’t go through what I have in life, I wouldn’t be me or have done half the things I’ve accomplished over the years. My past experiences are what made me who I am today, and I wouldn’t change any part of them. They are what gave me the drive to be successful and create a positive change in the world. I will meet each new challenge and goal with the same intensity. I will continue to be resilient, because no matter what I do in life there will be staring, comments, and people who say I won’t succeed. If there is one thing I have learned, it is that people say many things, but they aren’t always right. Someday I will be living proof that nothing, and no one, will stop me from accomplishing my goals in life.