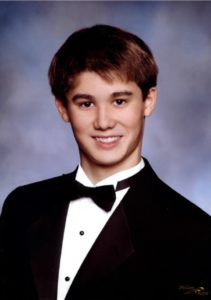 It was Halloween season and the teacher handed out gigantic Goosebumps posters. Without warning, they exploded into a creature made from green ooze, multiplying, contaminating, and encroaching the whole school. The creature splattered out like syrup that someone had microwaved. Its mere presence made me falter, go numb, and want to scream. Terrified and alone, I was surrounded by classmates who were now infected by a horrific parasitic slime. I hid under a desk to protect myself.

For months, this surreal episode haunted me in school every day. Eventually, I was diagnosed with Tourette Syndrome, Obsessive Compulsive Disorder, and General Anxiety Disorder. My motor tics were both involuntary and compulsive. I also created mental compulsions in my imagination to combat anything ‘bad’ to keep me safe: First, I focused on my defense, using my mind to create an energy shield all around me. I then built up my offense: I kept billowing imaginary fire from my body to blast and obliterate the green slime until it burned up into clear smoke.

I had to be home-schooled for a year before returning to middle school. At one point, I wondered exactly how long I would live with these disorders. With the support of many people, I slowly gained better control of my tics and compulsions. I was gradually integrated academically and socially. I learned to control my ‘imagination’, to bend it to my will, and master it instead of letting it run wild. It was no longer a curse; it was a blessing. I gradually developed the ability to harness the power of my imagination to help me face my circumstances and view my world in new and unique perspectives.

When I had few friends, I created my own friends and various worlds in my mind.  These friends were different versions of me: a hero, an explorer, a swimmer – all different types of characters with their own personalities.  They shared with me their stories and aspirations. They whipped me back into shape when I needed some tough love. They reassured me it was cool to wear “socks with Crocs”, and honorable to stand up for a friend being mocked. I was determined to be an independent thinker who does not follow the masses or seek approval from my peers.

Nowadays, I rarely need to purge my fears with imaginary fire. I no longer need the crutch of my imaginary friends. My imagination has become my arsenal of inspiration. During swim races, I create vivid images of a world where water becomes air, pierced through by my wings as I fly through the air like a falcon. Other times, I become a jet fighter flying over the Pacific, touching down on an aircraft carrier. Each time I finish the race into the wall, it is like my wheels slamming upon the metal deck of the carrier as I screech to a halt. When I study Chinese characters, the lines move, forms bend, and shapes dissolve to reappear in my mind as pictograms that the characters once originated from. The pictograms become animated images. The Chinese characters literally become characters with dialogues and actions in a story.

The images and stories in my customized universe, created by my ever-active imagination, have become the source of my strength and my vision. They encourage me to overcome the impossible and inspire me to reach beyond the seeable and the thinkable. The characters and creatures are akin to my children; they are my legacy. I have a spot for every one of them in this technological age of virtual worlds and merged reality, where anything is possible in video games and digital animation. I dream of bringing them to life and turning their stories and their worlds into stunning, exciting, and unique sensory adventures.

As I reflect on my TS and OCD experience, it’s hard to believe I was that fragile kid and how far I have traveled in this journey. Through force of will and discipline, and with the support of many people, I steadily overcame my adversity. I have learned to face down my fears and stand up to negativity. I am more confident with who I am, and more compassionate towards other people’s unique situations. Since my symptoms never truly disappear, they are daily reminders to keep fighting. Working extra hard and advocating for myself, I have come to terms with who I am. I look forward to a bright future.