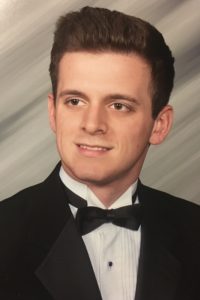 Even though many people in the outside world regard Tourette syndrome as a disability and hindrance towards a person’s overall success, I believe Tourette’s has been a God-given gift that has shaped me into the strong-minded and resolute individual that I am today. When I was six, I was officially diagnosed with Tourette’s syndrome, but did not begin to experience the effects of my disorder until a few years later. Growing up, I attended a private, Catholic school that had about twenty students per class. In the fourth grade, word quickly spread around that I was the “weird kid” as more of my peers realized that I was the only one who moved his face in strange ways. Although none of my classmates were bothered by my tics, a couple of boys from the grade above me took this as an opportunity to tease me every time I saw them. After a few months of ignoring the endless bombardment of name-calling and insults, I unfortunately decided to fight back with my fists instead of my words. Predictably, I ended up in the office of our principal, an authoritarian nun who had zero tolerance for violence. Expecting to be scolded by her for my actions, I was surprised to hear her say that Tourette syndrome was a blessing from God and not to worry about what other people thought or said about it. While what she said still resonates in my mind to this day, I only started to believe her after I attended the NJCTS Tim Howard Leadership Academy this past summer.

Before I attended the Academy, I chose to ignore the fact that Tourette’s is an important part of my identity, despite what my principal told me seven years ago. Heading into the Academy, I thought I was just going to learn about coping mechanisms, for when my tics become unbearable, and how to explain to new acquaintances that I have Tourette syndrome. What I took away the most from the Academy though, was how to successfully use resilience, courage, and grit in my pursuit of playing collegiate baseball. During my time at Rutgers, I was in the midst of the recruiting process and was preparing for the largest showcase I would be attending the next week. I was undoubtedly afraid of not performing to the best of my abilities that stemmed from a lack of confidence. However, at the Academy I learned that in order to compete amongst the elite baseball players in the United States, I must overcome the hardships I faced in the past, athletically and psychologically, so I could confidently develop into a better pitcher. Of the three traits, nonetheless, grit was the characteristic that I believe helped me the most during that showcase. Baseball has and always will be a game that tests a person’s strength of character and distinguishes the best players from the rest of the field. The same can be said about how I started to live with my Tourette’s after I left the Academy. Instead of continuing to hide my tics from the outside world and let insecurity consume me, I chose to dive into life with an open mind ready to accept the curveballs God sends my way. With this new mentality and approach to adversity, I was able to pitch my way into the hearts of a handful of college coaches and am happy to say that I will be continuing my baseball career at Kenyon College next year.