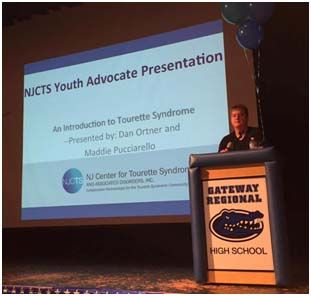 WOODBURY HEIGHTS, NJ— Youth Advocate Daniel Ortner is on a mission to raise awareness of Tourette Syndrome in South Jersey.

Tourette Syndrome (TS) is a neurological disorder characterized by involuntary movements or sounds known as tics and is frequently accompanied by other neurological or mental health disorders. 1 in 100 school-age children lives with TS and many report feelings of isolation and have been bullied because of their disorder.

16-year-old Ortner was trained as Youth Advocate for the NJ Center for Tourette Syndrome and Associated Disorders, Inc. (NJCTS) and on Friday, June 3, led a Youth Advocate presentation to nearly 200 seventh graders at Gateway Regional High School in Woodbury Heights.

NJCTS Youth Advocates like Ortner are making a difference in the lives of kids in the TS community. Because of his dedication to raising awareness of this misunderstood and misdiagnosed disorder, Gina Cordero of Congressman Donald Norcross’s office (D-NJ 1st District) presented Ortner with a congressional proclamation in recognition of his dedication and advocacy on behalf of Tourette Syndrome after his presentation at Gateway Regional High School.

“Youth Advocates like Dan Ortner foster understanding, sensitivity, and tolerance of TS while displacing the myths and stereotypes that are often associated with this misunderstood and misdiagnosed disorder,” said NJCTS Executive Director Faith W. Rice. “We are proud of Daniel’s efforts to raise awareness and educate the community in South Jersey.”

For more information about Tourette Syndrome and the work of NJCTS, call 908-575-7350 or visit www.njcts.org.

Your ticket for the: Youth Advocate raising Tourette Syndrome Awareness in South Jersey