Kathie Sterzinar is a believer in the joyful power of music. 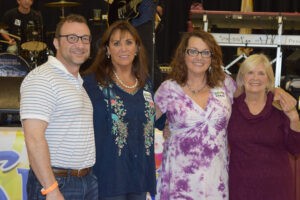 It was on a chilly morning last fall, during the New Jersey Center for Tourette Syndrome’s NJ Walks for TS in North Jersey, that she decided to show her support for the TS community in a big way. She brought the idea for TS Rocks- a concert to raise awareness of TS – to  NJCTS Executive Director Faith W. Rice.

“I was delighted by the idea of a concert and Kathie’s enthusiasm brought everything together in a very big way,” said Rice.

Tourette Syndrome is a neurological disorder characterized by involuntary sounds or movements, known as tics. It’s a cause very near to Sterzinar; her teenage nephew is one of more than 20,000 New Jersey kids living with TS and its associated disorders. In the backstage of the plan, she envisioned the day as a jubilant way to combat the stigma associated with the disorder.

“For me, music has always helped me in all the chapters of my life,” said  Sterzinar of Red Bank, “I hope that music will help to bring awareness and comfort to my brother’s family and all whom Tourette Syndrome has impacted.”

She gathered a large team of committed volunteers and recruited singer-songwriter Pam McCoy to produce the show.

McCoy brought the biggest names on the shore scene to the Charles Hesse Center in Atlantic Highlands: Bobby Bandiera, Bethanne Clayton, Taylor Tote Band, Carl Gentry and the Moroccan Sheepherders. The room was packed and the crowds enjoyed an afternoon of food, drinks, special guests including NJ 101.5 FM’s Big Joe Henry and Medicated Pete from The Howard Stern Show, auctions and a dancing-in-the-aisles classic rock sing-a-long.

The spirit among those in th 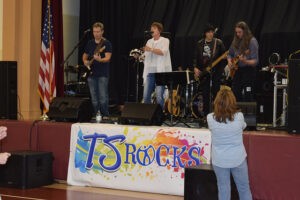 e audience echoed a willingness to learn about Tourette Syndrome and to embrace the things that make us all different.

“The challenges we face are always easier when we have old and new friends eager to understand,” said Rice, “When you put that to music, nothing feels insurmountable.”

Conquering stigma and struggle through verse and chorus, even if just for a day,  was what Sterzinar knew would be possible all along.

Your ticket for the: TS Rocks – First Ever Benefit Concert a Large Success