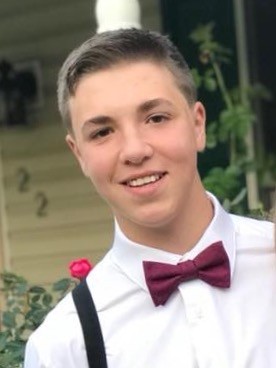 Matthew is a 2018 NJCTS Scholarship finalist. He is a graduate of Pinelands Regional High School. This is his scholarship essay.

I have had Tourette’s Syndrome for about eleven years now, and it has progressively gotten worse with each year that passes. I was first diagnosed with it when I was about eleven years old, but actually had it since I was seven. I never even noticed it until I really started to feel my body continuously wanting to twitch. My parents didn’t know exactly if I had Tourette’s yet, so that’s why they had taken to a specialist where I was finally diagnosed with this disease. According to my dad it runs in the family. It had started from my grandfather, to my dad, to me. It’s really scary and upsetting finding out that you’re different from other people, and knowing that there is no way to fix that an really hurt you.

After I was diagnosed in sixth grade, all I could think about was how to hide this from all of my friends. It was impossible to hide, but no one really seemed to notice … yet. Seventh grade came around, and I was really excited to be in middle school and a little nervous because it was a brand new place to me. I have a lot of nervous tics, and this was one of the worst times for me because it was the beginning of the school year and I was twitching left and right all day long. My head would shake sometimes, and I would blink every other second really hard and uncontrollably.

One day, I was at lunch with some of my friends, and I was starting to calm down until I had made one little movement with my eyes. One of my friend’s had noticed and said, “Why did you just do that with your eyes?” I said I had no idea what he was talking about, and then he decided to ask in front of everyone if I had Tourette’s. My body froze and I became more nervous and began to twitch more and more, but I kept denying them the true answer.

Some days I was made fun of for having Tourette’s, and it really hurt me hearing my own friends make fun of me. I can say though that seventh grade wasn’t my worst year when it came to dealing with Tourette’s. From seventh grade to twelfth grade during basketball season was always the worst for me because I was always so nervous and I really didn’t want anyone to catch me twitching at my games, but by trying to hide it so much only made it worse.

Not only did it affect my athletics, but it also affected my academics as well. Around ninth grade I started to feel that I was losing focus in class and I honestly was. I didn’t know why at first, but when I started to get poor grades on assignments it would make me pretty upset and that started to trigger my twitches more and more. I then quickly realized that it was my Tourette’s that stood in the way of me focusing in class, but it was just so hard to control, and it still continues today, but not as often. It was just so hard to pay attention and if I didn’t twitch I felt like I was going to explode and the more I tried to hold it back and focus, it got worse. But like I said, it doesn’t happen that often anymore because I’ve started to figure out ways to help myself calm down and try to do something else instead of twitching like, bouncing my leg, or wiggling my fingers, and it does help sometimes.

When it comes to having Tourette’s Syndrome, it really is hard to do most things, but you have to try to beat it when it gets worse. Some days are better than others, and you have to take advantages of those good days. I don’t want Tourette’s, and I would do anything to be completely rid of it, but I can’t be. I want to be somebody in the future, and I’m not going to let Tourette’s stop me from doing what I want to do and enjoy.