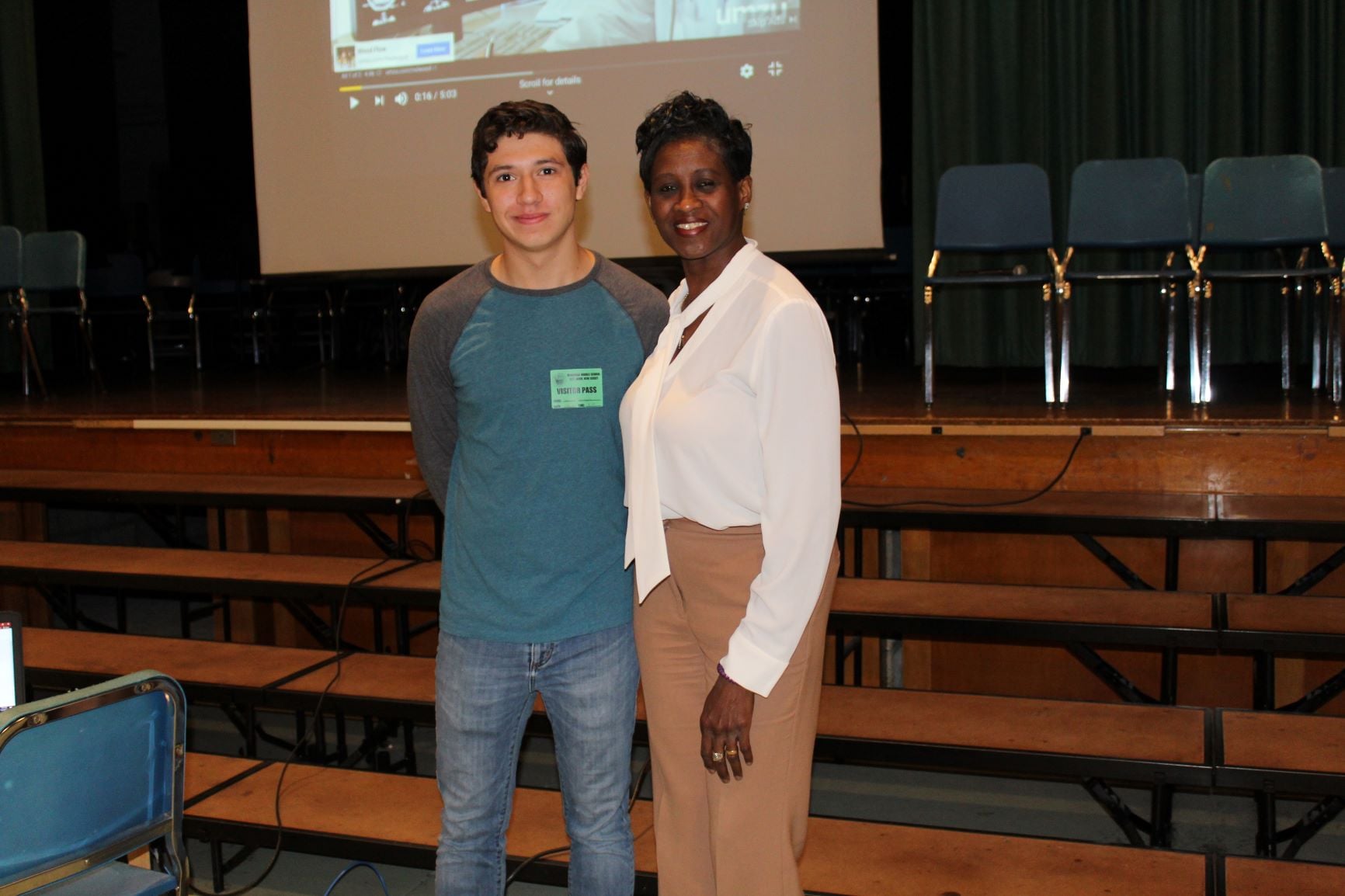 Hello, my name is Dominic Dominguez. I have been working with NJCTS for about three years as a Youth Advocate, mostly going to schools to advocate for Tourette’s, but I have also been involved with Camp Bernie, Dare to Dream, and the Tim Howard Leadership Academy. I just started as the Youth Development Intern with NJCTS and my story was sent out to people on the NJCTS mailing list, but this is a longer more personal version if you care to read it.

I still vividly remember the first day I started ticcing back in eighth grade (people usually start ticcing around 7, I was a late bloomer). I was sitting in class doing work when the left corner of my mouth started to twitch, jerking to the side tugged by an invisible fish hook. The tics expanded, radiating to the whole left side of my face as it started to tic and scrunch. I went to the nurse where my tics rapidly progressed from a simple mouth twitch, to my whole face contorted in a twisted smile and my neck painfully craning to the side. My mom came to pick me up, and as we walked out of the school- a place I would not return to for two months as I learned to cope with my Tourette’s- I stumbled, unable to look forward and walk straight, my first experience struggling with the strange and uncomfortable feeling of tics. My Tourette’s rapidly progressed, and before I knew it I had more tics than I could count, ranging from snapping to bowing and screaming to laughing. Despite how obnoxious and strange my tics often were, I rarely encountered negativity from others, because I locked myself inside, only encountering the public on doctor’s visits, afraid to even see my own family. Like many people with Tourette’s and other cognitive disorders, the greatest struggle did not come from how others perceived me, but how I perceived myself.

When I first started ticking I was so confused and in conflict with myself. I was also struggling with depression, partially believing I was ticking merely to get attention for my invisible affliction.  I often felt like I had control of my tics despite how random and unwanted they were. Ticking feels like an uncontrollable urge or impulse and so even though it is almost or completely impossible to resist, it can feel like I am making the decision myself. And more confusingly, people can suppress their tics, if only for a short time. It took a while to overcome feeling I was somehow at fault, and understand I should not feel guilty, because I did not bring this on myself in any way. However, even after working to overcome many internal struggles with Tourette’s, I still feared the stares of strangers when I ventured out in public. People often looked for a moment, only to furtively turn their heads and pretend as though I did not exist. I stressed over their thoughts and silent judgements. My worst fear came to life one day at the neurologist. I was sitting in the waiting room, my face contorted in some wicked smile, pondering how I was supposed to lay perfectly still for an MRI used to determine why I could no longer stay still, when a little girl looked at me and turned to her mother to ask a question. She asked, “What’s wrong with him Mommy?”. For a moment I felt like a monster, like Frankenstein. But then, I thought more about her tone and realized I had mistaken naivety for disgust. I realized that when people looked away from me in public, they weren’t judging me, just confused about how to react to someone like me. I knew in that moment I had to inform people about Tourette’s, and dispel the great stigma and ignorance that surrounds it.

I was diagnosed with a chronic tic disorder (unable to fit the criteria for TS because of the short length of time I had my disorder) and major depression a couple months after I started ticking. I was put on medication (clonidine and citalopram) and went back to school in the Spring. Before I reentered school I had a few meetings with the administration and my teachers. It was important for me to advocate for myself and be able to communicate the things I needed. I set up a plan with the school administration to be able to take unlimited walks or bathroom breaks and extra time with homework or reduced work as necessary. I also talked to my teachers about how I wanted them to react to my tics in the classroom. For me I felt like it was unhelpful to ignore my tics completely because I ended up frequently ignored as well. My teachers were kind and understanding and made my tics less embarrassing without pretending they didn’t exist. For instance, I have coprolalia and one of my teachers decided to say the word “happens” every time I would yell the S word. It was funny, and I’ve often used humor to make myself feel better about the weird disorder I have, as well as make others more comfortable around my tics and not make it so taboo.

After eighth grade my tics became less noticeable to others and less confusing and strange to myself. To me they just became a part of my life, always noticeable and sometimes inconvenient, but rarely bewildering. Few people except my closest friends and the family I lived with knew I still ticked or ticked at all. Anybody who saw how I was in eighth grade always seems surprised to know that I still have it, and those who find out now have the same reaction. A coworker for example saw me tic and asked if I was having a stroke. I told him “No, I have Tourette’s”. He said “No you don’t”. I said “Yes I do”. He said “You’re joking”, and that continued for a while until he finally realized I was serious and apologized. I told him he had nothing to apologize for and he could ask me anything he liked. Because of that interaction and my willingness to talk openly about my disorder I was able to inform one more person about Tourette’s and break the stigma. And when I was alone in a backroom with another coworker, he told me that he overheard I had Tourette’s and let me know he had it as well. We talked for a while about our tics and both felt a little less alone. My friends who know I have Tourette’s but have never really witnessed it have made comments that hurt more than teasing, things like “I know you tic but it isn’t that bad” or “Alex has Tourette’s too but it is a lot worse than yours”. Tourette’s is a disorder often characterized in the media by loud and visible outbursts of noise and motion, usually obscene. But many struggle with Tourette’s silently, whether it be craning my neck up in class unable to see my timed essay, flexing my calves until they burn, the anxiety that my tics will become as severe as they once were, or the tic attacks- the full body paralysis and seizure like behavior that has only manifested in the privacy of my home. Many people like myself also struggle with comorbids, disorders that not only compound but aggravate the tics like depression, anxiety, OCD, and ADHD. These struggles are often silent and unaddressed unless we make our voices heard. After my tics began, I had quickly come to realize that even though my syndrome and the stigma that surrounds it is not my fault, I am the only one who really understands my Tourette’s, and it is my responsibility to get others to understand it too.

I started searching for opportunities to get involved with Tourette’s and reached out to the Tourette’s Association of America but was unable to join them. I worked with a wonderful organization called Peak Potential that helps disabled children rock climb, but did not really fit in. Towards the end of my sophomore year of high school I found NJCTS and applied to their youth advocate program. This is also when I was officially diagnosed with Tourette Syndrome (I wanted to be diagnosed so I could identify as someone with TS even though it was unnecessary medically as I was already being treated). Working with NJCTS, I feel like I am a part of something bigger than myself and really able to make a positive tangible difference in the world. I love presenting and educating people about Tourette’s and tics, dispelling misinformation and making a strange disorder more familiar. But, my favorite part of presentations is the question and answer portion where I am able to share a little bit about myself, and help people empathize with the experience of having Tourette’s as well as understand the person behind the tics. However, there is no more rewarding feeling than when a kid finds the courage to be open about their tics in front of their school, or seeks me after a presentation to tell me how much it meant. I have heard so many stories of bullying, treatment I luckily never had to face. Kids are random, noisy, and silly, so when a kid does something like shout random words or flail their arms, it’s funny and shocking and kids laugh, or adults scold, unaware of how their words and laughter stings. I am a youth advocate to speak for those who feel they don’t have a voice and promote the idea that we should think about others before we act, and stand up for ourselves when we are misunderstood.

Tourette’s is an inseparable part of who I am, and I choose to embrace my tics and all that comes with them. When I first started ticking I found television would calm my tics, and so I drowned myself in programs. But sitting inside all day and watching TV is depressing. As I went back to school and tried to reenter my life, I found it wasn’t TV that helped me cope, but any activity that drew my focus. My band teacher told me playing music would alleviate some tics, and I first thought he was just trying to get me to practice more, but it turned out he was right. I currently do things like art, run, or simply converse with people to keep my mind occupied and the tics at bay. These interests do not get rid of my Tourette’s, but refocus the energy, creativity, and life that defines me and our community. Medications helped, but a year ago I decided the clonidine and then guanficine’s side effects- the constant physical and mental exhaustion- were worse than my actual tics, and so I have been off medication since September of last year. The best thing I have done for my tics is to address my depression and anxiety by staying physically healthy, productive, and making the effort to be positive and loving to myself. I am currently on a gap year working as an EMT, headed to college in the Fall of 2021, and incredibly ecstatic that I get to intern with some of the most kind and motivated people I have ever met.

Dominic will be posting more in the coming months. You can reach him at ddominguez@njcts.org.