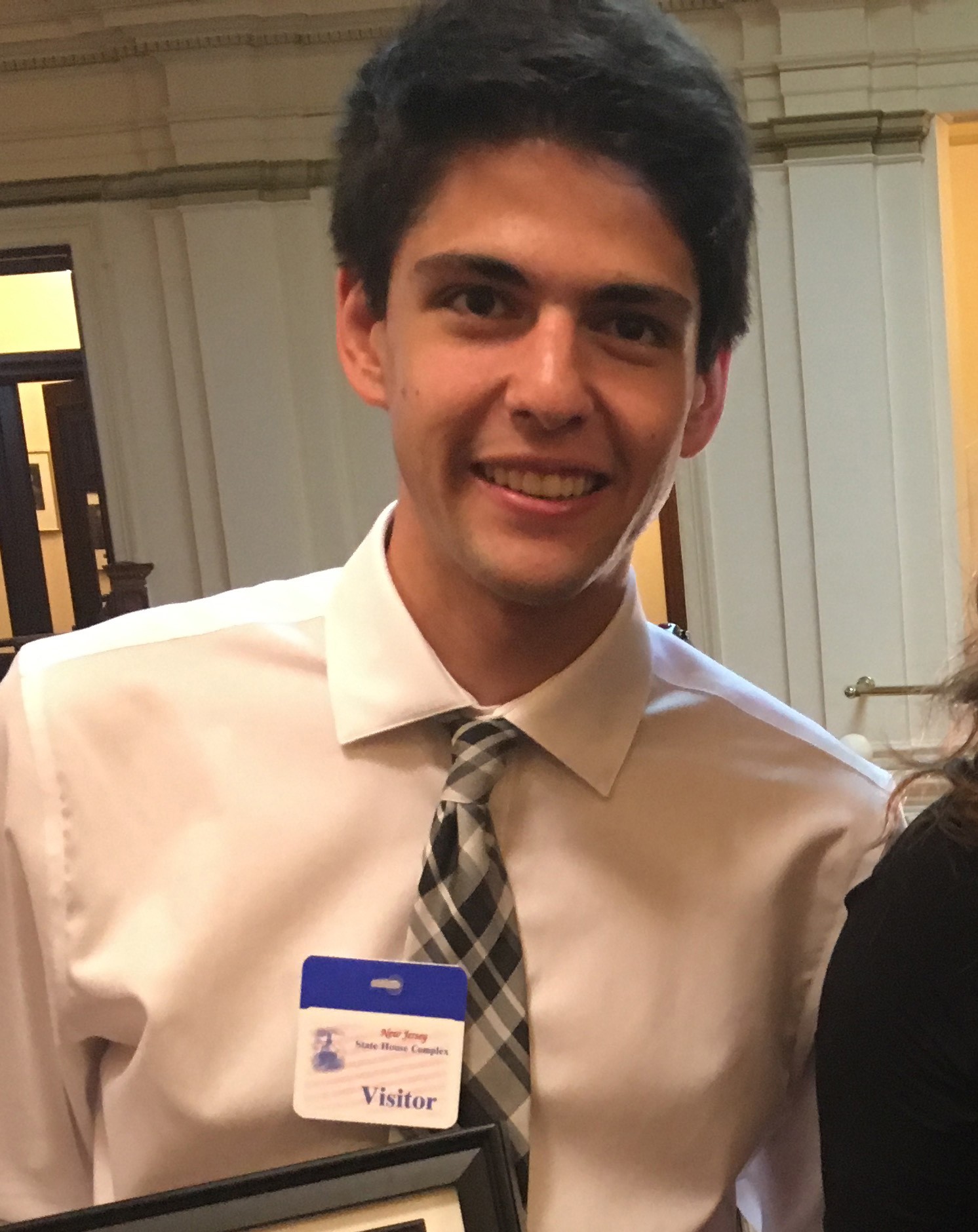 Michael is a second place winner of the 2018 NJCTS Scholarship Award and a Youth Advocate of the Year. This is the essay he submitted with his scholarship application.

When I was 10 years old, I was presented with a challenge: a diagnosis of Tourette’s Syndrome (TS). Then, I did not know what the future would bring, but my experiences over the years have led me to a true understanding of myself.  Mentoring a young child from my town gave me an early glimpse into the rewarding feelings of leadership, and speaking in front of dozens of doctors gave me the confidence to talk to anyone about my disorder and to use my TS – something that could be seen as a detriment – to propel me toward success.

In 6th grade, the typical challenges of being a preteen were exacerbated by my parents’ divorce at home and the daily increase of my tics due to TS. I even left school early on multiple occasions due to migraines caused by a tic during which I would painfully roll my eyes into the back of my head. That year, my school nurse disclosed to my mom that there was a 2nd grade boy named Quinn who had recently been diagnosed with Tourette’s Syndrome, and was struggling in school. She wondered if I could talk to him from time to time in order to help him cope with the diagnosis and succeed in school. I agreed to meet Quinn, because I had experienced similar difficulties, and hoped I could alleviate some of his stress and confusion. Upon meeting, we immediately clicked. He and I were both Jets fans, video game enthusiasts, and had never – knowingly –  been with another kid who had Tourette’s. It was refreshing to be around someone who did not care if you disapprovingly shook your head without reason or coughed when you were not sick. Talking with him allowed me to give advice on dealing with TS and provided an opportunity to vent about how TS affected me. When a person has had similar experiences to you, it feels like they have an elevated ability to listen. Hearing how he dealt everyday with issues that I did as well lessened my feelings of loneliness: I was not in this fight alone.

My nurse connected me with the New Jersey Center for Tourette’s Syndrome, my state’s organization for TS, and when I was 12, I was given my first assignment as a youth advocate for NJCTS. It was certainly a daunting one: I would assist a medical doctor in presenting to Grand Rounds at Hackensack Hospital, an event that would have an audience of approximately 80 medical students and doctors. I was terrified! I had never spoken about Tourette’s to more than one or two of my friends at a time, let alone a large group of medical professionals. Meeting before Grand Rounds, the doctor said he would handle the medical-speak, and I would talk about my personal experiences having TS; I had plenty of them! He made his presentation, using scientific words I had never heard before; then came the time for the audience to ask questions. To my surprise, almost every question was directed toward me and my life with Tourette’s. I felt proud to be able to assist in medical professionals’ understandings of TS by fielding their personal questions. This experience of talking to doctors about Tourette’s provided me with a newfound confidence that I could educate and support all who sought to learn about the disorder.

Now, instead of feeling held back or disadvantaged, I know that I can conquer my Tourette’s Syndrome, while still spreading awareness to thousands of children, getting straight A’s in the years which are usually considered the hardest of high school, and captaining both a Cross Country/Track and Ultimate Frisbee team. My experiences throughout the years and my continued efforts of leadership and awareness have shown me that I know who I am and will tackle any challenge that may arise in the future.