Rutgers and NJCTS Continue to Lead the Way in Collaborative Research 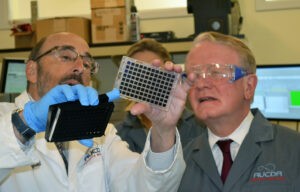 In the second significant Tourette research publication of the year, Rutgers University-New Brunswick has announced that their scientists are the first to use a Nobel Prize winning genetic engineering technique to create brain cells from the blood cells of individuals. The technique was used in a three-generation family with Tourette syndrome to help determine what causes the disorder.

Dr. Jay Tischfield, senior author of the study published in Molecular Psychiatry and MacMillan Distinguished Professor of Genetics at Rutgers says, “I think this technique will give us a better understanding of what sorts of genes cause this disease. Also, these cells could be used to screen drugs that might be effective for treatment.”

In May, Dr. Tischfield, Dr. Gary Heiman, a Rutgers associate professor in the Department of Genetics, Dr. Matthew Slate of the University of California San Francisco, Dr. Jeremiah M. Scharf from Massachusetts General Hospital and Harvard University, and other partner researchers from TIC Genetics published a study in Neuron which identified one damaged, or mutant, “high confidence” risk gene for Tourette as well as three others they believe are genes whose mutation is a probable risk for the disorder. The study is the largest and most comprehensive genomic analysis conducted, the goal of which is to identify inherited factors that play a role in causing Tourette’s and other related disorders, such as obsessive-compulsive disorder (OCD) and attention-deficit/hyperactivity disorder (ADHD).

The research began a decade ago in New Jersey when Rutgers started collaborating with NJ Center for Tourette Syndrome and Associated Disorders, Inc. (NJCTS) to establish the NJCTS Cell and DNA Repository which contains nearly 2,800 genetic samples of individuals that have been affected by Tourette or have a family member affected.

Rutgers scientists say more samples from families affected with Tourette’s are needed to better understand how these and other damaging mutations lead to Tourette disorder.

Take part in the NJCTS Cell and DNA Repository

More photos of Congressman Lance’s visit to the genetics lab

Your ticket for the: Rutgers and NJCTS Continue to Lead the Way in Collaborative Research

Rutgers and NJCTS Continue to Lead the Way in Collaborative Research