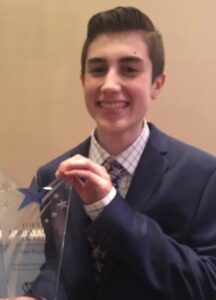 On April 17, The New Jersey Chapter of the American Academy of Pediatrics held their Ninth Annual New Jersey Children’s Ball at The Palace at Somerset Park in Somerset, NJ, where they recognized doctors who are making a genuine difference in the lives of children.  Also among the honorees, was 16-year-old Sam Regen of Robbinsville who received the prestigious Youth Achievement Award for his Tourette Syndrome advocacy and educational outreach.

Regen struggled when he was first diagnosed with Tourette Syndrome (TS) as a child and refused to leave the house out of fear of people judging him. TS is a neurological disorder characterized by uncontrollable movements or sounds known as tics. As many as 1 in 100 people show signs of TS which is frequently accompanied by other disorders including ADHD, OCD, and anxiety.

As Regen’s tics became worse, he made a choice. He decided to use his voice to educate people so they would understand what made him different and why he was ticcing.

“I quickly learned that if you educate others, they will be more understanding. So I went on a mission to teach 100 people – my teachers, friends, and family,” Regen said. “But I wanted to reach more. So I went on to 1,000.”

Regen became an NJ Center for Tourette Syndrome (NJCTS) Youth Advocate and now regularly represents NJCTS at community events and fundraisers, telling anyone who stops by his table his story. He speaks to children at schools about his journey with TS and the importance of accepting other’s differences and not bullying them for it.

“When Six Flags Great Adventure called NJCTS and asked if we knew of someone who could come and speak to the audience before their summer teen concert, Sam was the logical choice,” said Faith Rice, Executive Director at NJCTS. “He has the confidence and demeanor to deliver a very powerful message.”

That evening, he took the stage and gave a brilliant five-minute speech to 3,000 teens who were captivated by his story.

Last summer Regen attended his first NJCTS Tim Howard Leadership Academy at Rutgers University. The Academy is an intensive four-day training that promotes self-advocacy, self-leadership, resilience, and grit—all important skills to succeed while living with TS.  When asked why he wanted to participate in the program, Regen responded, “I want to learn more leadership skills so I can advocate for others and better explain Tourette Syndrome.”

The Academy was designed by NJCTS with input from soccer superstar Tim Howard, who also lives with TS.  Regen met Howard at a special event about four years ago and has been inspired by his support of TS awareness. Howard made a special video appearance at the Children’s Ball to congratulate Regen on his accomplishment.

“I want you to know how very proud we are of you,” Howard said in his taped message. “You are the exact reason we do what we do. The way you advocate for others and yourself is a special mission. One that has been my life’s work and my journey. So thank you for continuing to fight the good fight.”

The NJ Center for Tourette Syndrome and Associated Disorders, the nation’s first Center for Excellence for Tourette Syndrome, is a not-for-profit organization committed to the advocacy of children and families with Tourette Syndrome and its associated disorders. Dedicated to delivering high-quality services to these individuals, the Center recognizes the importance of educating the public, medical professionals, and teachers about this disorder through programs and affiliations with public schools, health centers, and universities. Visit www.njcts.org for more information.

Your ticket for the: Robbinsville’s Sam Regen Recognized with Youth Achievement Award for His Advocacy Work