Members of the General Assembly helped NJCTS recognize Youth Scholarship winners, Youth Advocates of the Year, and top fundraisers in a ceremony at the War Memorial.

To mark the occasion of Tourette Syndrome Awareness Day in New Jersey, NJ Center for Tourette Syndrome and Associated Disorders (NJCTS) celebrated with an awards ceremony at the Trenton War Memorial on Thursday, June 6. During the ceremony, NJCTS presented college scholarships, recognized the top fundraising teams, and awarded the Youth Advocates of the Year.

Scholarships were given by NJCTS to accomplished high school seniors who live with Tourette Syndrome (TS)—an inherited, neurological disorder that affects 1 in 100 individuals. These awards were all presented by Assemblyman Daniel Benson (District 14). The top scholarship award was presented to Maya Wagner of Hillsborough and Dylan Wallace of Toms River. The second place awards were presented to Michael Carroll of Linwood, David Gustavson of West Orange and Christian Pisano of East Windsor. Finalists included Tara Barr of Nutley, Elyse Bell of Hillsdale, Trey and William Donovan of Chester, Dana Lutsky of Manalapan, Brandon O’Leary of South Plainfield, Damion Sanderson of Gloucester City, Connor Staine of Clinton, and Matthew Vitella of Bloomfield.

“We are immensely proud of these young men and woman and all that they have accomplished,” said Faith Rice, Executive Director of NJCTS. “They have shown that TS does not have to hold you back. Thank you to their parents who have raised such wonderful children who have grown into strong leaders in our community.”

Earlier this year, NJCTS conducted a virtual event: NJ Walks for TS. Several families participated by creating their own event to raise awareness and funds for TS. Together they raised more than $30,000. The top fundraising team captains were awarded certificates of achievement along with their fundraising incentives by Assemblywoman Serena DiMaso (District 13). The team captains were Jatin Nayyar of Morganville (Team Jatin), Nicholas DeLieto of Spotswood (Nicholas’ Trek with Tourette), Sofia Trabilcy of Flemington (Trabilcy Tackles Tourette), Jameson Dougherty of Newfoundland (Team Jamo), and Nathan Zellner of Rahway (Team Tourette-a-saurus). Also recognized was Jacob Gerbman of Fair Haven for Jacob’s Fester Fundraiser that netted more than $8,000.

Youth Advocate of the Year awards were presented to the graduating advocates in recognition of their contribution to making a difference in New Jersey’s Tourette Syndrome community. NJCTS Youth Advocates are dedicated to improving awareness and breaking the stigma of TS by educating the public, medical professionals, and educators, and by supporting kids and families living with TS. Youth Advocates receiving the award this year were Tara Barr, Ethan Lederman, Jeff DeCicco, Victoria Franco, Jonah Grossman, and Brennan Skirzenski.

The joint resolution which officially designated June 4 of each year as “Tourette Syndrome Awareness Day” in New Jersey was signed by Governor Murphy last year. 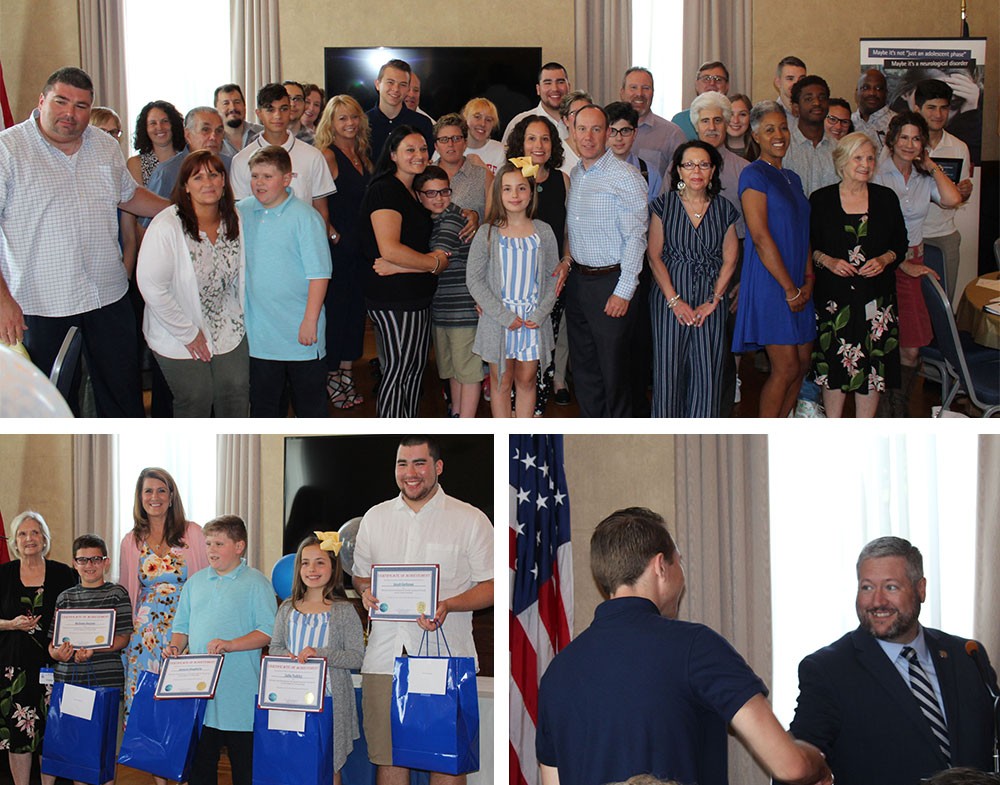 Your ticket for the: NJCTS Celebrates Tourette Awareness in Trenton