Edison Police and Firefighters faced-off in a hoagie-making challenge, raising money for two of their favorite charities—including the Somerville-based NJ Center for Tourette Syndrome and Associated Disorders, Inc.—at the grand opening of a Wawa store in town. 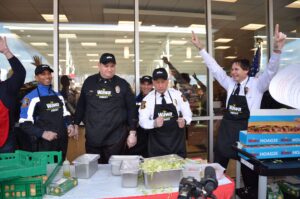 On Friday, December 9, the brand new Wawa at Woodbridge Avenue and College Drive hosted the hoagie making contest, which helped a team of five Edison police officers, including Police Chief Thomas Bryan, raise $1000 for NJCTS and a team of five firefighters raise $1000 for the St. Barnabas Medical Center’s Burn Center in Livingston.

“I am proud of our police officers and firefighters for stepping out of their conventional roles to help raise money for these worthy charitable causes,” said Mayor Thomas Lankey, who officiated the ribbon-cutting at the new Wawa.

Ultimately, the police team came out the victors, cooking up an impressive 44 hoagies to the fire team’s 39.

“It was an honor raising money for such a good cause,” said Edison Police Chief Tom Bryan. “We are proud to support the important work of the NJ Center for Tourette Syndrome.”

Tourette Syndrome (TS) is a neurological disorder characterized by involuntary movements or sounds known as tics and is frequently accompanied by other neurological or mental health disorders. 1 in 100 school-age children lives with TS and many report feelings of isolation and have been bullied because of their disorder.

Chief Bryan was a guest speaker at the 2016 NJCTS Tim Howard Leadership Academy held in August at Rutgers University where he offered personal and professional advice to the participants—teens living with Tourette Syndrome from across North America—about speaking to law enforcement officers about their TS.

“We are honored that our friend Police Chief Tom Bryan and his team chose to support NJCTS during this exciting challenge,” said NJCTS Executive Director Faith Rice. “We thank them all for helping to raise awareness  for the 1 in 100 children in New Jersey living with Tourette Syndrome.” 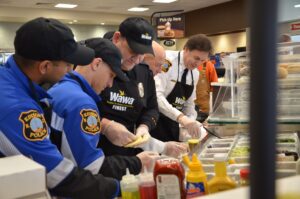 For more information about NJ Center for Tourette Syndrome and Associated Disorders, Inc., please call NJCTS at 908-575-7350 or visit www.njcts.org.

Your ticket for the: Edison Police Make Hoagies for NJCTS at Wawa Grand Opening