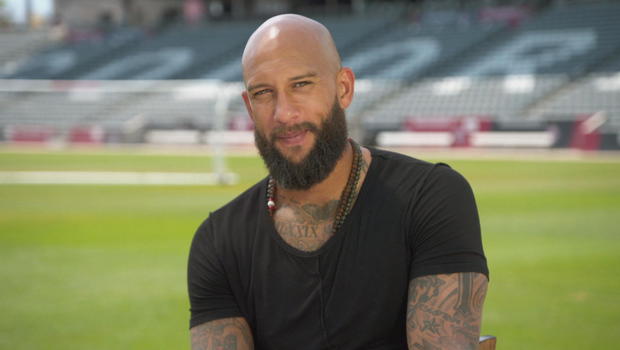 Timothy “Tim” Howard (born March 6, 1979) is an American soccer player who played goal for the US Mens National Soccer team. He grew up in North Brunswick, New Jersey, and was diagnosed with Tourette Syndrome when he was in the sixth grade.

Tim’s soccer abilities drew the attention of Tim Mulqueen, who had been an assistant coach for the United States men’s national under-17 soccer team. At age 15, Tim began playing in goal for U.S. youth national teams. He made his international debut against Honduras on the U-17 squad. One month before graduating from North Brunswick High School, Tim played for the Imperials in his first professional game.

Tim played in the English Premier League for 13 years joining Manchester United in 2003 after a six-year spell with the MetroStars in MLS. Howard moved to Everton in 2006, initially on loan and then on a permanent deal. He rejoined MLS with the Colorado Rapids in 2016 and announced his retirement in 2019. However, on March 4, 2020, he announced his return to professional soccer, signing a playing contract with Memphis 901 FC in the USL Championship, where he also serves as sporting director and minority owner.

A premier shot-stopper, Tim was a mainstay on the US Men’s national team. Starting in goal for the US in the 2010 and 2014 World Cups, he holds the record for most saves in a World Cup game with 16.

Tim has spoken openly about TS and has educated millions of people across the world about the disorder. “I’ve always tried to live my dreams, even if they were too big for me to fathom,” he said in an interview with Yahoo Sports. “With Tourette Syndrome, it was never a stop sign for me, it was always just a little bump in the road and I would just keep going. It wasn’t going to stop me from achieving my dreams. I try and tell all the kids that I meet that hope to be amazing one day and be a professional athlete or a doctor, or a lawyer, or whatever they want to be. I tell them they can do all that because Tourette’s won’t stop them. If I can inspire a kid who plays goalkeeper, or who plays soccer, or who has Tourette’s, then I feel like it’s all worth it, and I think those are the days that make me feel the best. Winning is fun, but those moments that you can touch someone’s life in a very positive way are better.”